A federal judge said Tuesday that there was a “strong showing of bad faith” by the Trump administration in adding a controversial question about US citizenship to the 2020 census. The judge hinted that he would allow the case to move forward over objections from the administration, and senior administration officials will be subjected to questioning under oath about why the question was added.

Judge Jesse Furman of the Southern District of New York, who was appointed by President Barack Obama, said the administration “deviated from standard operating procedure” by adding the question with no testing. Furman ruled that the plaintiffs challenging the question—including the state of New York and the American Civil Liberties Union—can depose senior officials from the Commerce Department and Justice Department as the case moves forward.

The census has not asked respondents about their citizenship status since 1950. Civil rights groups say the citizenship question will depress response rates from immigrants, imperil the accuracy of the census, and shift political power to areas with fewer immigrants. The census determines how $675 billion in federal funding is allocated, how much representation states receive, and how political districts are drawn.

Commerce Secretary Wilbur Ross, who oversees the Census Bureau, approved the citizenship question in March, saying it was needed for “more effective enforcement” of the Voting Rights Act. Ross said at the time and in subsequent testimony before Congress that he approved the question after the Justice Department requested in December 2017 that it be added.

However, Ross stated in a memo he filed to the court on June 21 that he first considered adding a citizenship question to the census after he was confirmed as commerce secretary in February 2017, months before the Justice Department requested the question. He wrote that he had approached the Justice Department about the question, not the other way around, after consulting with “other senior Administration officials” who had “previously raised” the citizenship question. 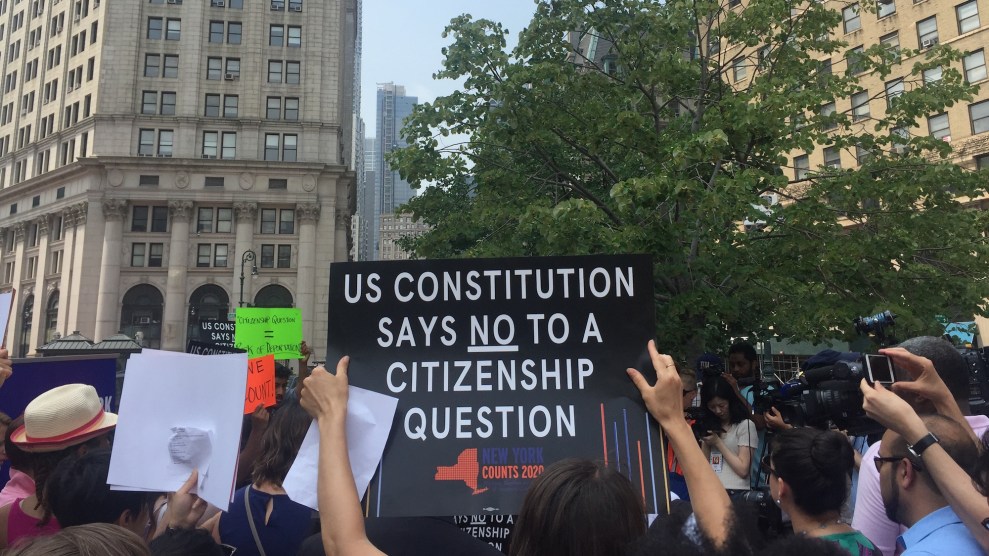 One of the senior administration officials who lobbied Ross to add the question was former White House chief strategist Steve Bannon. In July 2017, Kansas Secretary of State Kris Kobach—at the time the vice chair of President Donald Trump’s now-defunct Election Integrity Commission—wrote to Ross “at the direction of Steve Bannon” and said it was “essential” that the citizenship question be added to the census. Kobach wrote that the absence of a citizenship question “leads to the problem that aliens who do not actually ‘reside’ in the United States are still counted for congressional apportionment purposes.”

Kobach’s correspondence with Ross contradicted the Trump administration’s stated rationale for the question—Kobach never mentioned the Voting Rights Act in his letter—and suggested that the question was added to reduce the political clout of areas with many immigrants and boost Republicans.

The emails from Kobach to Ross were among 1,300 pages of documents the administration released to the court. But Furman said the Commerce Department needed to release a more complete list of documents to the court showing how Ross made his decision. “‘It’s inconceivable to me there aren’t additional documents,” Furman said. He said the plaintiffs could depose 10 officials from the Commerce and Justice departments—but not Kobach or Bannon—as part of the lawsuit.

The Justice Department asked Furman in May to throw out the lawsuit. Furman did not rule on that matter on Tuesday, but he hinted strongly that he would allow the case to proceed. He ordered the Commerce Department to produce any missing documents by July 23 and said he hoped to begin a trial by the end of October. The litigation by the attorney general of New York and 16 other states is one of the six major cases challenging the citizenship question.