How Gerrymandering and Voter Suppression Paved the Way for Abortion Bans

In recent days, Republican-dominated legislatures in Alabama, Georgia, Ohio, and Missouri have passed some of the harshest abortion restrictions in decades. But aside from their collective assault on reproductive freedoms, these states have something else in common: a systematic effort to distort the democratic process through voter suppression and gerrymandering. These tactics have greased the way for near-total bans on abortion and for other extreme right-wing policies.

“Bad policies like the forced pregnancy bill are a direct result of voter suppression.”

Georgia is a perfect example. The state’s 2018 governor’s race became the epicenter of Republican voter suppression efforts. As secretary of state, Republican gubernatorial candidate Brian Kemp essentially oversaw his own election and instituted a series of policies that hurt his Democratic opponent, Stacey Abrams. On Kemp’s watch, Georgia purged 1.4 million people from the voter rolls from 2012 to 2016; put the registrations of 53,000 people, 80 percent of whom were voters of color, on hold before the election; and closed 214 polling places in six years. On Election Day, there were four-hour lines in heavily black precincts. All this helped Kemp win the election, and last week he signed into to law a measure prohibiting abortions after six weeks of pregnancy.

Meanwhile, extreme partisan gerrymandering has helped Republicans establish strangleholds on state legislatures around the country. After winning control of the redistricting process following the 2010 election, Georgia Republicans concentrated black voters into as few districts as possible in order to maximize the number of heavily white Republican seats. In 2018, Kemp narrowly won with 50.2 percent of the vote, but Republicans held nearly 60 percent of state’s legislative seats. There are few swing districts left in the state—in 2018, an incumbent was elected with no opposition in 112 of 180 House districts in the state.

This set-up helps insulate GOP lawmakers from any public backlash over their votes. Georgians oppose the new anti-abortion law 49 percent to 44 percent, according to a recent Atlanta Journal-Constitution poll. Yet the bill easily cleared the GOP-dominated state legislature, with nearly all Republicans, and just one Democrat, voting yes.

Alabama Republicans have pursued a similar gerrymandering strategy, segregating black voters to boost conservative white Republicans. In his successful campaign for the US Senate in 2017, Democrat Doug Jones won 50 percent of the vote but carried just one of Alabama’s seven congressional districts—a sign of just how lopsided the state’s political map has become. That same year, a federal court ruled that 12 of Alabama’s legislative districts were illegally racially gerrymandered. The Republican State Leadership Committee—which funded the GOP’s takeover of numerous state legislatures in 2010 and then coordinated the drawing of new, gerrymandered maps—spent $1.5 million to flip Alabama red for the first time since Reconstruction.

Forty-five percent of Missourians support abortion rights in all or most cases, compared to 50 percent who oppose them in all or most cases, according to a 2014 Pew study. But that state’s bill—which outlaws abortion after eight weeks, even in cases of rape—sailed through the Senate Thursday with the backing of more than 70 percent of its lawmakers, all of them Republicans.

A 2016 analysis by Rewire News found that 22 states had passed new restrictions on both voting and abortion since the 2010 election, which pro-choice advocates don’t believe is a coincidence. Many of the constituencies that strongly support abortion rights—such as women, young people, and voters of color—are among the most likely to be impacted by tactics such as gerrymandering and voter suppression. 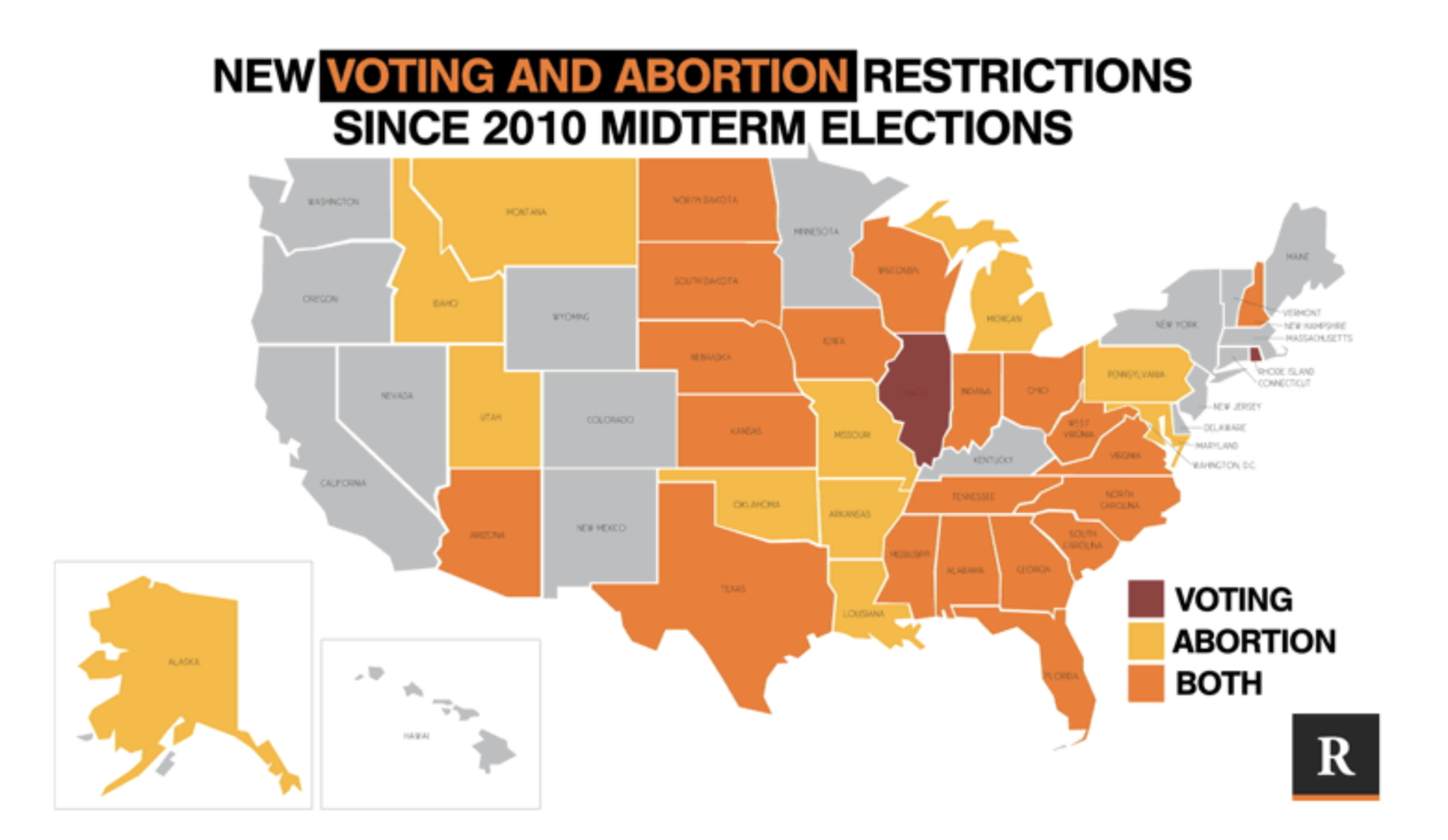